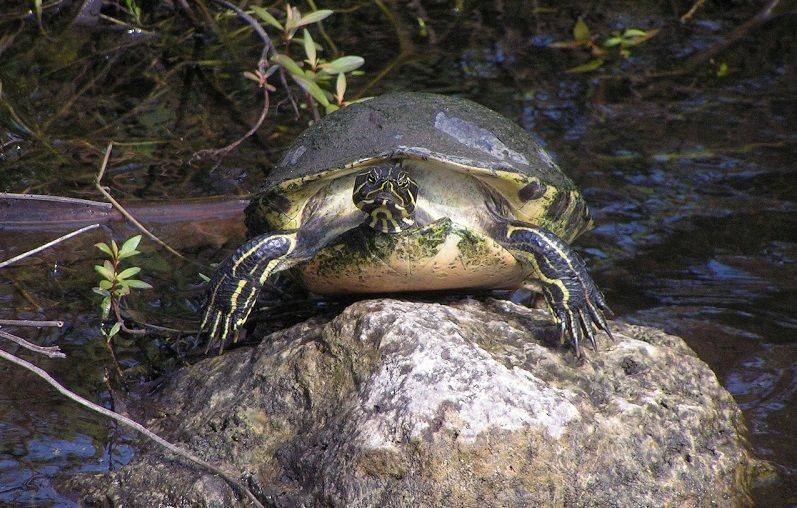 Identifying the gender of a yellow-bellied slider male or female is no simple task. Unlike in mammals where the genitals are visible and help in identification, they aren’t visible in these turtles. Therefore, for you to determine whether your pet is male or female, you need to go for the extra mile.

First, you would need to buy your turtles from a breeder who hatched them in order to know their genders early. Actually, the gender of turtles depends on the temperature under which the eggs are incubated

If that isn’t possible, there are physical features that would help you to determine the gender of a yellow-bellied turtle. Only that you would have to wait for some time for the features to develop.

In this article, we will look at some of the physical traits that identify a yellow-bellied slider male or female.

For you to vividly see the differences between a male and a female turtle, it is advisable to have both so that you can compare as you read.

The shape of the shell

One feature that can help you tell whether your yellow-bellied slider turtle is male or female is the shape of their shells.

The shells of the male and the female are slightly different in their shape. Mostly, you’re likely to notice a difference on the lower side of the shell known as the plastron.

In females, the plastron happens to be flat and wider than in males. This helps them to carry more eggs in them.

For the male yellow-bellied sliders, they have a slightly concave shaped plastron. This shape allows the male to climb on the female during mating.

The Shape and Size of the Tail

Without a doubt, the most distinctive feature of the male or female yellow-bellied sliders is the size and shape of their tails. Comparing their tails happens to be the easiest way to tell between the boys and the girls.

First, a male slider will feature a longer and thicker tail. The reproductive organs of the male turtle are positioned on the tail. Therefore, the long and thick tails help to accommodate them.

For the females, they have thinner and shorter tails than their male counterparts. Due to possible overlap, this is not a foolproof method to sex the turtles. Actually, it can only be correct when matched with other features.

Position of the Cloaca

The turtles have a small orifice located on the underside of their tails. The hole is known as the cloaca.

Looking at the position of the cloaca is another excellent way of differentiating between the male and female yellow-bellied sliders.

In males, the cloaca is located towards the tip of the tail, and it is slit-shaped. In simple, you will find the male further from the shell; it looks much longer.

In females, the vent is located near the base of the tail. Also, unlike in males where the cloaca is slit-shaped, female’s cloaca is rounder. Again, it takes the appearance of a star.

For the female yellow sliders, the orifice is nearer to the shell than in the males.

Long claws are another easy feature distinguishing the male yellow-bellied sliders from the females. The long claws attract females to the males during the mating season. Also, when mating, the males use their long claws to climb on the females.

In addition, turtles use the long front leg claws to claim and defend their territories.

Therefore, you will quickly tell a male from a female when you compare the length of their front claws.

Comparing the Body Sizes of Yellow-Bellied Slider Male and Female

Though this may not be an excellent method of comparing young turtles, it is possible to tell the gender of mature ones by looking at their body sizes.

For mature turtles, the females tend to be bigger than the males. Also, by comparing the lengths of the upper side of the shell, which is known as carapace, the females are longer.

Females can grow to a length of 11.4 inches while male yellow-bellied sliders can hardly get past 9.4 inches.

Like mentioned earlier, this alone may not be a reliable way of getting the gender of your turtles.

Another sure way to know whether your yellow-bellied slider is male or female is by observing then during the mating season. Generally, the males will try to attract the female by dancing.

Also, the males look straight to the females they want and extend their forelimbs. At the same time, they will place their long claws on the head and neck of the female and pulsating them as well.

Determining the gender of turtles can complex and confusing. Unlike other animals where external genitalia helps in sexing, you have to look at other physical features to correctly group these reptiles.

For you to end up with the correct gender for your yellow-bellied slider male or female, you need to combine several signs. It can be hard to outrightly tell the gender of the turtles by using only one feature.

Like mentioned earlier, some methods are less reliable in identifying the sex of these animals.

If all signs that you look at point to one side, you more likely to have correctly determined the gender of your pet. In case you get mixed signs, you let the turtles get older, and you can then try again.

With time, you will find it to be easier as you get used to looking at these traits