The dog that suffers resource protection is the one that “protects” through aggression the resources it considers valuable. Food may be the resource most frequently protected by dogs, but it is not the only one. Thus, there can be dogs with protection of resources for food, places, people, toys and almost anything imaginable.

What is resource protection? How to identify a possessive dog?

In typical forms of this behavior, the resource-protected dog reacts to the proximity of both acquaintances and strangers.

If you have known a dog that does not allow anyone to get close to its owner, then you have met a but with protection of resources (in this case, from the owner). Similarly if you can not approach a dog when it is eating or has a toy in its mouth . You can also buy wireless dog fences to keep track of your dog.

This strategy is very common among dogs, and allows them to defend their possessions when other dogs try to take them away. When a dog has taken possession of a resource (food, toy, etc.), the others usually respect that situation even if the first one is smaller. However, if another dog tries to take that resource away or comes closer, the first one will react with growls or aggressiveness . That is resource protection.

Of course, there are cases in which a larger dog can take away a resource from a smaller one, but those cases usually occur only when the availability of that resource is very limited and it is essential for survival.

Guarding resources in other species

Although better known in dogs, the resource guard is not exclusive to that species. On the contrary, it is a typical behavior of all social animals. Many years ago, when I was still in college, I was able to see this behavior by making an ethogram of a group of captive jaguars at the zoo.

That group (completely unnatural) consisted of 12 jaguars and they were all fed at the same time. When a piece of food had no owner, jaguars fought over it. But when a jaguar had seized a piece of food, no other attempted to take it away (with rare exceptions). This had nothing to do with dominance or other similar interpretations, because even Cindy, the weakest and smallest jaguar, was respected when she had her food.

However, without a jaguar approaching another that had food, the latter began a series of aggressive deployments. If the first one kept getting closer, an attack used to happen.

While guarding resources is a natural behavior in dogs, it is also a dangerous behavior for humans and especially for children. In fact, it is often young children who discover that the house dog suffers from resource protection, because they do not assess situations when they approach the dog well.

To make matters worse, the dog that is a guardian of one resource can generalize that behavior to several resources. Thus, a dog that starts protecting his food can go on to protect his toys, the chair, a particular person and other valuable resources for him. In the end, you have an aggressive dog towards everyone who comes close to anything.

The good news is that it is relatively easy to prevent your puppy from becoming a resource guardian and it is not that difficult to eliminate that behavior in most cases (although there are some cases more complicated than others). 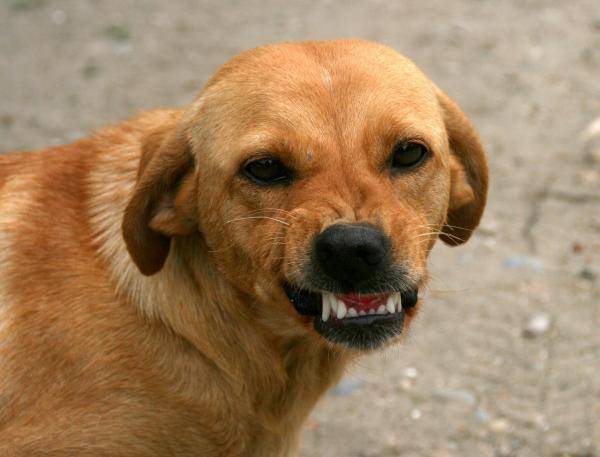 How to prevent protection of resources in puppies

If your dog is a puppy and has not yet shown signs of developing resource protection , you can prevent the problem from appearing with the following tips:

Train him to drop objects to order and to ignore things. Both exercises teach him self-control, which reduces impulsive reactions, and also teach him that giving up resources (toys, food, etc.) can have very pleasant consequences (awards, congratulations …)

To avoid protecting resources with toys, the ideal would be to work with the dog and teach him to drop objects. Collecting toys should be a fun activity in which we offer the toy to the dog on a regular basis, we retrieve it and offer it again.

The important thing in this case is that the dog does not have the feeling that we “take away” his precious toy but rather that we are sharing a fun activity with him. Nor should we attempt to remove the toy from its mouth. Visit our post and teach your dog to drop objects .

This part is undoubtedly the most important in the protection of resources. That our dog considers us (or another person) his resource is not at all positive since it can lead to serious aggressive problems. To do this we will thoroughly work on the socialization of the dog when it is a puppy.

As we have commented in socialization , animals, people and surroundings participate. In this case, it will be important to introduce people of all kinds (adults, children, adolescents …) and let them caress you, offer you prizes and treat you correctly.

If this process is carried out properly, our dog will not suffer protection of resources with people since it will understand that the human being is friendly and good with him (and with you).

Avoiding this problem is relatively easy. To do this we will start offering bits of food directly from our hands to our puppy dog ​​to reward him in training or in the behaviors that we like him.

Then we will start offering food from our hand before putting your food and we must be sure that you watch us when we empty the food in your bowl. This insight will help you understand that it is we who provide your food generously. This will help you not to protect this resource.

When we see that he totally trusts us, we can even put our hand close to the feeder when he is eating. Mainly if you are a puppy and have never displayed any aggressive or possessive attitude before, there should be no problem. Never give him the special food if he shows any sign of aggression because in that case you will be reinforcing the aggressive behavior.

If no problem occurs during the application of this program, you should continue the prevention until your dog is an adult. For that it will be enough that you give food from your hand occasionally, and that the rest of your family does. This usually happens during obedience training, since you will use a lot of food during it, so no special program is necessary.

All the exercises that we have explained should be applied to puppies, never to dogs that already suffer from resource protection . In this case, and mainly to avoid aggression, we must go to a professional.

What to do if my dog ​​is possessive?

Generally, dogs that suffer from resource protection warn before attacking with a growl , a slight and constant sound that alerts us not to follow our intentions. If so, it will probably bite us.

In other more serious cases, dogs bite directly , it is then when we must work on bite inhibition, a complicated issue when the dog is an adult and that must always be carried out by a qualified professional in conduct problems.

What to do when the dog growls at you?

When the dog growls at us, it is alerting us to imminent aggression. At this time dominance and other punishment-based training criteria become totally dangerous as they can provoke an unexpected reaction from the dog.

Also, we should never scold the dog since that could invite him to think that it is better to attack than “warn”. A behavior that, within the bad, is good. The growl is part of the dog’s natural communication.

The ideal is not to force the situation and be careful with the limits that the dog accepts and adapt to them. In these cases, especially if we do not have knowledge about dog training, it is to go to a professional who explains how to work with our dog, what are the guidelines that we must follow for our specific case and some exercises to treat the possession of resources such as it can be teaching a dog to drop objects or practicing crops to improve the habit of possession with food.

What to do if the dog bites us?

Again we will repeat that it is not advisable to scold or punish the dog. We must avoid aggressive situations at all costs that, in addition to being very dangerous, stress the dog and seriously worsen the relationship with us. In these serious cases we must go to a professional immediately .

Selena is a blogger and a guest contributor for a well-known brand that includes MESHEBLE & INTHEMARKET. In her leisure time, she plays tennis.