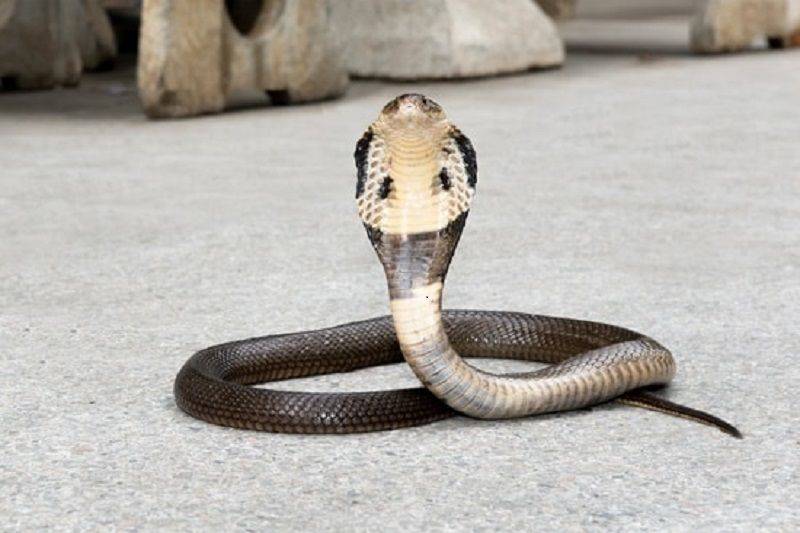 Whether you are out on a tour, or you have a snake for a pet, you need to keep safe. There are possibilities that when you are out hiking, you suddenly come across a snake. Then, you need to ask yourself, “How far can a snake strike?”

Well, that is a question every person who likes visiting places with potential snake encounters should have the answer to. Notably, there are many instances in which the snake may deem it necessary to strike. The two most likely reasons are hunting for food and defense.

Therefore, for those who keep reptiles as pets, they may quickly get struck when laying a snake substrate. The animal may mistakenly misjudge your actions as offensive and strike in defense.

Surprisingly, the snakes strike so fast that they are faster than a blink of an eye. In that case, you need to maintain a safe distance between the two of you.

How Far on Average Can a Snake Strike?

Naturally, the experience of encountering a snake is scary to most people. All the same, snakes tend to avoid interacting with humans since they are not potential meals.

In most cases, when a snake is confronted with the option to flee or to fight, the reptile would rather slither and move from you. However, if a snake senses that your presence is imminently offensive, then it will take a defensive stance.

So, the best thing is to keep a safe distance between you and the snake. But how far is safe enough, and how close is too close?

Since snake strikes the part that seems to be of great danger to them, then it is advisable to put snake-proof boots as you trend on snake habitations.

When threatened, most snakes will coil their bodies tightly. At this point, it is evident that the snake is ready to defend itself. It is from this coiled position a snake will launch its most accurate strikes.

The snake makes an S shape with the upper part of the body while the rear part remains coiled at a central point. At the same time, the head and the eyes will be staring straight at you.

At this point, the snake is ready to launch themselves forward if the threat persists.

Technically, the snake coils up because defending itself is easier than when stretched out. The animal keeps eye contact with its adversary with its body shifting when necessary if the attacker tends to circle.

If the snake feels it’s right to attack, it instantaneously releases the S-loop thrusting its head at the target. The whole action could take as little as 70 milliseconds, and they will have hit its target.

Generally, the more neck and body mass a snake uses in the S-loop, the further it can strike from.

Again, not all snakes will get into this striking position. Others like the king cobra will tend to lift their necks vertically, while the rattlesnake can do both.

Can a Snake Strike Without coiling

Actually, there is a myth that rattlesnakes can’t strike if they are not coiled. If you happen to attack them suddenly, they will strike without coiling themselves. The only difference will be that it may not strike you from far.

For example, the beaked sea snake forages for food at the seafloor. Most times, it quickly lashes its head sideways to bite its food without requiring coiling.

Therefore, there isn’t anything that would stop a snake from a coiled or uncoiled position. Also, it is good to note that a snake can strike in all directions.

Can a Snake Jump to Strike?

First, to jump like humans, the snakes would need legs to push them from the ground. Imagine yourself lying with your belly against the ground. It would be impossible to jump.

Actually, the best you could do is to lift your head.

In the same way, a snake may lift its coiled necks from the ground, but the tail will remain flat against the ground.

As a snake strikes, this may be accompanied by a small jump forward.

For example, a four-feet cottonmouth snake can jump up to a foot forward when they strike at an aggressor.

Also, if a snake is striking downhill, the gravitational pull and the momentum of the snake pull a snake further forward than on flat terrain. Therefore, one would easily mistake this motion as a jump, but it isn’t one for a fact.

When it comes to a snakes striking distance, many factors come into play. These include:

From what we had said earlier, most snakes will strike up to a maximum of half of their body lengths. Therefore, a longer snake will have a more extended reach.

For you to be on the safe side, it would be better to stand at a distance equal to 2/3 the snake’s body length. Actually, this could be safe enough since snakes can’t jump at you.

Also, in sudden encounters, the snake may not coil before striking. This means that chances of being bitten are few.

Generally, snakes will avoid any contact with humans since they are not potential prey. If they happen to find themselves facing human beings, snakes tend to slither away.

All the same, the inevitable may happen, forcing the snake to strike. If that happens, it is in the course of self-defense. At first, the snake will coil itself up and get ready to launch a strike. Since you have read this far, you now know how far a snake can strike.

The best way to stay safe is by keeping enough distance from the snakes. By so doing, the animal may not feel threatened. If it strikes, it may not strike a distance longer than half its body length. So, watch out and stay safe.