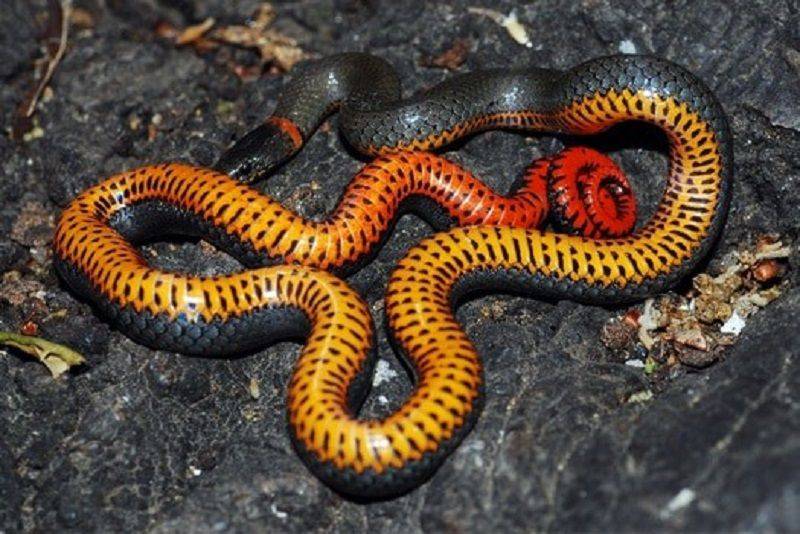 Petting a snake can get troublesome. It is not as easy as having some cows, dogs, cats or birds at your home. A snake as a pet requires skill and also courage. Not all snakes are that poisonous but having a venomous snake at home as a pet, well, can sometimes get fatal.

Although snakes require less time and attention than cats or dogs, they have to be well maintained. We need to take care of the feeding and tank cleaning and also daily clear up to keep a happy and healthy snake. Snakes may not recognize you as their owner but will understand that you play an essential role in their lives. This is why they take up less time for the owner.

‘Is a ringneck snake poisonous?’ Well, let’s see what we can learn today.

What Is a Ringneck Snake?

A Ringneck snake may be found in a shiny or a matt color of olive, brown, black or greyish blue on the top. It may commonly have a band around the neck of yellow, orange, red or even a mixed shade of these colors. Underneath its body, you will see the same color as the neck from the head till the tail broken by dark dots all the way. They often flip upside down while attacking to scare off the prey or threat with its color.

The size may differ from 10 to 15 inches and very thin, about one-fourth or eighth of an inch, which makes it easy for them to hide and escape.

RIigneck snakes are not forthcoming and mostly come out at night. They are very uncommunicative and rare to be seen. Mostly active between evenings and dawn.

Despite the fangs and highly toxicants, they may only get deadly for the smallest species of prey animals. Let us look deeper into the fact, is a Ringneck snake poisonous or not.

Is A Ringneck Snake Poisonous?

The answer to this question is a little broad and need to be adequately explained.

Actual venom snakes have a pair of small venom glands at the back of their head to store the toxicants continuously and have venom ducts to transport the produced venom from the glands to the fangs.

Poisonous snakes often bite with their fangs, the hollow teeth sink into the bite, and the venom is shot through the fangs into the body of the prey.

Well, Ringneck snakes are observed to kill their prey with a combination of constriction and also biting poison into the victim. When investigated, they seemed to have no glands or fangs but have a similar gland called the “Duvernoy” gland that is similar to the venom gland in venomous snakes but situated in a different place and also produces a weaker venom.

So we can conclude that Ringneck snakes are more of constrictors than venomous. They will bite their prey first and then wrap their body around the victim to slowly kill it for food. However, that is only when they attack their prey.

This rare species of snakes have a different strategy while defending themselves from threats or danger. There is a vast difference between when a snake is biting to eat and biting to scare away or defend itself. They do not keep their mouth clamped shut when defending themselves. Instead, they somewhat retreat. They try to shock the predator and look for escape routes.

So, Can a Ringneck Bite Kill?

Well, Ringneck snakes do have poison in their bites and bite quite hard, but they are not enough to kill an average healthy person. The venom might get into your bloodstreams but it is not enough to cause you fatal damage. The fangs of most of the Ringnecks are very small, so small that they cannot get to the bloodstream under the skin

As we know, the Ringneck snakes are very small and so they can hardly bite you within the fingers or legs, arms or the torso are too big for them to wrap their tiny teeth and cause a bite. They will not be able to clamp their mouth shut on the bit correctly.

So What About Small Children?

Well, that is a lovely point, can a Ringneck bite your children?

The answer to this question is, yes, they can bite small children as they have shorter arms, but still, the fangs are tiny and bet backward hence the venom hardly reaches under the skin into the bloodstream. Therefore, they are not very dangerous, and your children are not receptive to Ringneck bites.

However, if you have small pets at home, then although you might not be at danger, your pets should be taken care of. A simple bite from a Ringneck can kill small pets such as mice, cats or other animals.

Dogs, on the other hand, are also susceptible to snakes. They in the other hand tend to disturb the snakes and that is when the snakes try biting dogs. Dogs run around with their nose on the ground which may encourage snakes to bite on their nose. This may cause swelling and nothing else. Ringnecks find it difficult to bite a dog as they are tiny in size.

What To Do If Ringneck Bites?

If a Ringneck bites you or your children, consider seeing a doctor as soon as possible. Well, the main reason might be that the snake might not be a Ringneck but some other species. You never know, you might be mistaken about the breed. There is absolutely no guarantee that the source is actually a Ringneck and not something else. Hence it would be beneficial as the doctor would immediately clean the bite area before any infection, and if a venomous snake bites you, medical care is mandatory.

‘Is a ringneck snake poisonous?’ Well, I think you’ve got all your answers in this write-up in a detailed way. Apart from what you’ve learned, you should know that a ringneck snake can be a good pet if you can keep up with it.