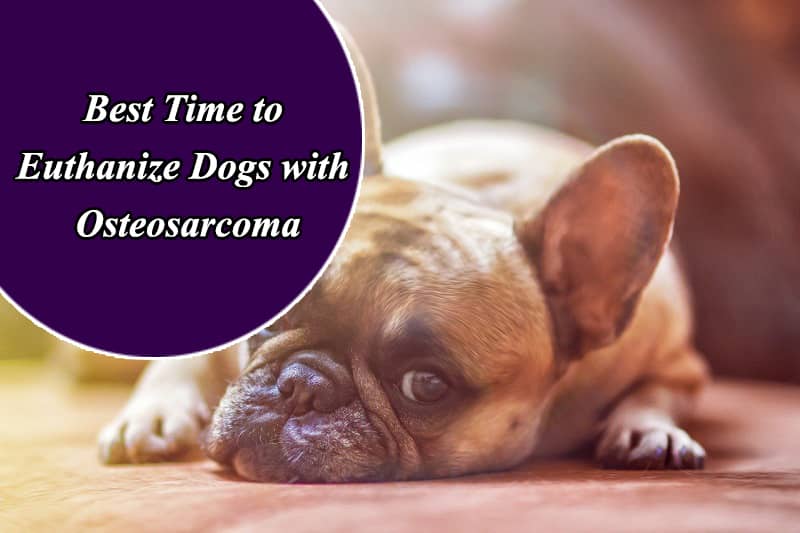 Are you familiar with the term osteosarcoma? It’s a disease where a tumor develops deep within the bones of your dog’s leg and afterward destroys it from the inside. The pain this disease comes with is very excruciating for your dog to deal with. It’s extremely aggressive and no cure has been discovered for it yet. So, if a dog develops osteosarcoma, it’s destined to die, that too a painful death.

Seeing your dog die like this is an experience you’d never want. The only way you can prevent going through this situation is by putting your dog to rest yourself. Shortly speaking, euthanizing it. Yes, euthanizing a pet you’ve taken care of for many years yourself is not easy, but in this way, you’ll be able to let your dog die a peaceful death he/she deserves.

However, there’s a proper time for euthanizing, which we’re going to discuss in this article. We’ve managed to acquire a lot of information on this subject after conducting a lot of research. We hope this can help you do this heartbreaking task.

As we’ve said before, osteosarcoma is a highly hostile bone disease. It primarily affects dogs of giant breeds. It happens when tumor starts growing deep inside the bones. Later, it starts to take over the healthy and perfect bone cells and afterward, destroys them. It causes an intense amount of pain.

If that wasn’t enough, the cancerous cells will eventually break away from the bones. It’ll affect other body parts like lungs, limbs, etc. The common symptoms of the disease are swelling, pain in the bone or the joint, weird or aggressive behavior, etc. Loss of appetite and getting fatigued easily are some noteworthy symptoms of this disease.

In this illness, the cancerous cells or tumor doesn’t have the same ability as normal bones to develop strongly. So, if there’s even a slight injury in that area, it’ll cause massive damage to your dog. This usually goes by the name pathological fracture. Like the disease itself, you can’t revive it.

Once the dog develops the signs of lameness, it’ll take one to three months for it to become fully lame. The occurrence of other symptoms involves which parts the tumor affected.

Every year, around 10,000 dogs in the USA contract this disease. In fact, this debilitating sickness is also responsible for about eighty-five percent of bone tumors among dogs. Recent studies have shown that around seventy percent times dogs develop this genetically. Moreover, older and larger dogs have a greater chance of catching this disease. Dogs weighing over ninety pounds or more than eight years old now remain at a higher risk of developing it.

How to Treat Osteosarcoma

Unfortunately, there’s no possible way to cure or treat osteosarcoma as it’s incurable. Treatment options that are available for this ailment can only extend the dog’s life to some extent. These treatments are of two options: assuaging the pain the dog feels and reducing the metastatic (rapid spreading) component of this disease.

The primary choice involves alleviating the pain with the amputation of the limb that has the tumor. Most of them, it’s successful in relieving the pain almost immediately. Although the probability of the disease unrolling still stay high. The other option that can help lessen the pain or discomfort is palliative radiotherapy, as well as bisphosphonate infusion treatments.

You can also perform limb-sparing surgery, which is generally performed by separating the malfunctioning cells or tumor without removing the leg. You must do this simultaneously with chemotherapy. As the surgery is a major one, it needs a lot of post-operative care as limbs take a lot of time to properly heal.

If you don’t have the courage enough to go through with amputation and palliative radiotherapy, you can try giving your dogs analgesic drugs. Though they aren’t that effective in lessening the intensity of the pain that much, they still give some sense of peace.

We also recommend some alternative treatment choices like targeted nutritional therapy that comprises of a keto diet to cure cancer among dogs. You can also opt for injecting natural remedies like the combination of bromelain, vitamins A, omega-3 fatty acids, vitamin D, and an herb formula known as Hoxsey. In many cases these particular treatments were successful in handling cancer.

The Best Time to Euthanize Dogs with Osteosarcoma

There’s no direct answer when it comes to euthanizing a dog with Osteosarcoma, as it’s involved with a lot of considerable factors. Still, for many dog owners, it all depends on the quality of its life.

If you see that your dog has completely lost its ability to live the life it once lived comfortably, if it’s going through constant, excruciating pain; then no matter how much it breaks your heart, but it’s time to give your goodbyes to your furry friend.

You should know that you’re not alone in this. There are many veterinary professionals who can guide you through the process of making this important yet heartbreaking decision. Also, don’t limit your consultation to one professional only; you should go for more than one.

In this way, you’ll be able to provide yourself with the best possible advices from multiple sources. Therefore, you’ll get the chance of weighing up your options and choose the best one for your furry friend. This will help you a lot when it’s about figuring out the right time for euthanizing your dog.

There’s no worse feeling than losing your canine friend to an aggressive disease like osteosarcoma. We can’t even imagine the pain it can cause one. We hope that what we’ve mentioned above can help you make out the appropriate time to euthanize your dog so that you can spend the rest of its living days knowing and making yourself mentally ready for it.

How To Euthanize A Dog With Benadryl?

How To Euthanize A Dog With Over The Counter Drugs?